Mary Jensen, wife of Powell River's Vestlandet 098 Sons of Norway president Harald Jensen, holds up the Norwegian flag while wearing a formal costume from Gudbrandsdalen, Norway. The flag will be raised at 1 pm on Saturday, June 11 at municipal hall as part of a celebration of the 100th anniversary of Norway's independence from Sweden. A free concert at 2:30 pm at the Evergreen Theatre will round out the celebration with music, dance, food and a video presentation. 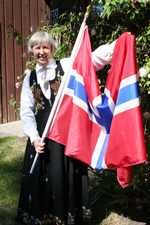 There seems to be a number of Norwegians in Powell River. Many attended the flag raising and some four hundred - many in regional costumes were at the concert as were the Hardinger fiddlers and the folk dancers from Victoria. What might interest you, as a Dørum, was that a letter dated 21/11/1905 - a few months after the proclamation of the constitution and an independent Norway was read by the mayor - Stewart Alsgard - also a Norwegian - in his opening address to the audience. This is a letter I got from you via Per Hendrichsen and was either written or sent to our grand-aunt Helene Dørum. It summarizes how excited the writer and Helene were with the newly gained independence. It was an appropriate letter for the occasion and good to have reference to the family in the celebrations.